Crime of the Week

If you have any information about these crimes or any person(s) involved, you are urged to call Crime Stoppers at or submit a Web Tip .  You do not have to give your name.  CRIME STOPPERS will pay a cash reward of up to $5,000 and you can remain anonymous.

During the evening of 12/09/21, Yonathan Michael Tessema, 34, of Brentwood, CA was walking south along the northbound improved shoulder. At some point after dark, he was struck by an unknown vehicle and killed. His body was discovered the next day and he was pronounced dead at 7:32 a.m. The investigation is ongoing and there is an active search for the driver and vehicle. The Texas Department of Public Safety (DPS) is asking anyone with information to call Kerr Crime Stoppers at 830-896-8477  or SUBMIT A WEB TIP ON at our website: http://www.kerrtips.com.

A tip to Crime Stoppers is anonymous and the first most accurate tip leading to the arrest and/or indictment of the suspect(s) is eligible for a cash reward up to $5,000.

The Point of Contact for Texas DPS is Texas State Highway Patrol, Corporal James Salaz at 830-258-8400. 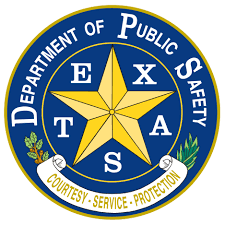 Theft of a Firearm and a Vehicle Burglary
October 01, 2021

On September 27, 2021 Kerr County Sheriff's Office, Deputies took a burglary of a vehicle report in the 200 Block of China Street, in Center Point, Texas.  Unidentified suspects entered a vehicle and stole United States currency as well as a pistol.  If you have information about this crime or others in Kerr County report tips anonymously for the chance at a reward.

Kerrville Police are investigating an armed robbery that occurred Tuesday morning, September 21, 2021. The robbery happened at the IHOP restaurant located at 1429 Sidney Baker at about 9:43 a.m. The suspect entered the store and brandished a semi-automatic pistol at the clerk, demanding money.

The suspect fled in an unknown direction following the robbery with an undisclosed amount of money. No one was injured. Anyone with information regarding this robbery is asked to contact the Kerrville Police Department at (830) 257-8181 or Kerr County Crime Stoppers at (830) 896-TIPS (8477).  Tips to Crime Stoppers are anonymous and the first, most accurate tip could lead to a reward. 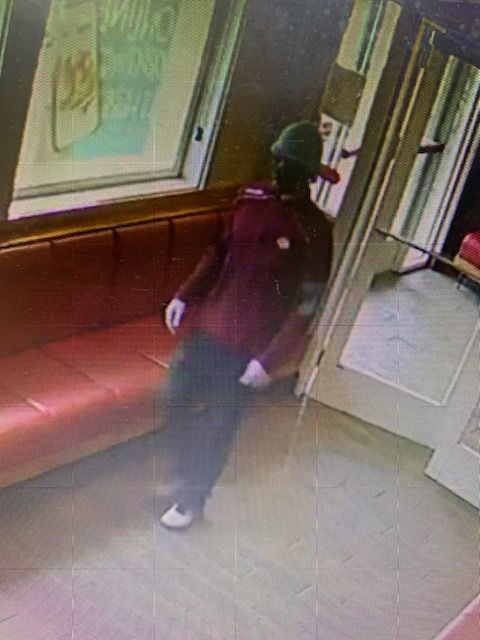 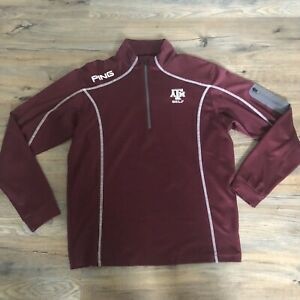 The Ingram Police Department is seeking information regarding several pieces of furniture that were illegally dumped in the 100 block of Cypress Falls Drive on August 31, 2021, around 5:00 P.M. Pictured  is the suspected vehicle and trailer involved in this incident and the items that were dumped.  If you have any information regarding the identity of the person(s) involved, please contact the Kerr Crime Stoppers Inc. by calling 830-896-8477 to remain anonymous and for the chance at a reward. 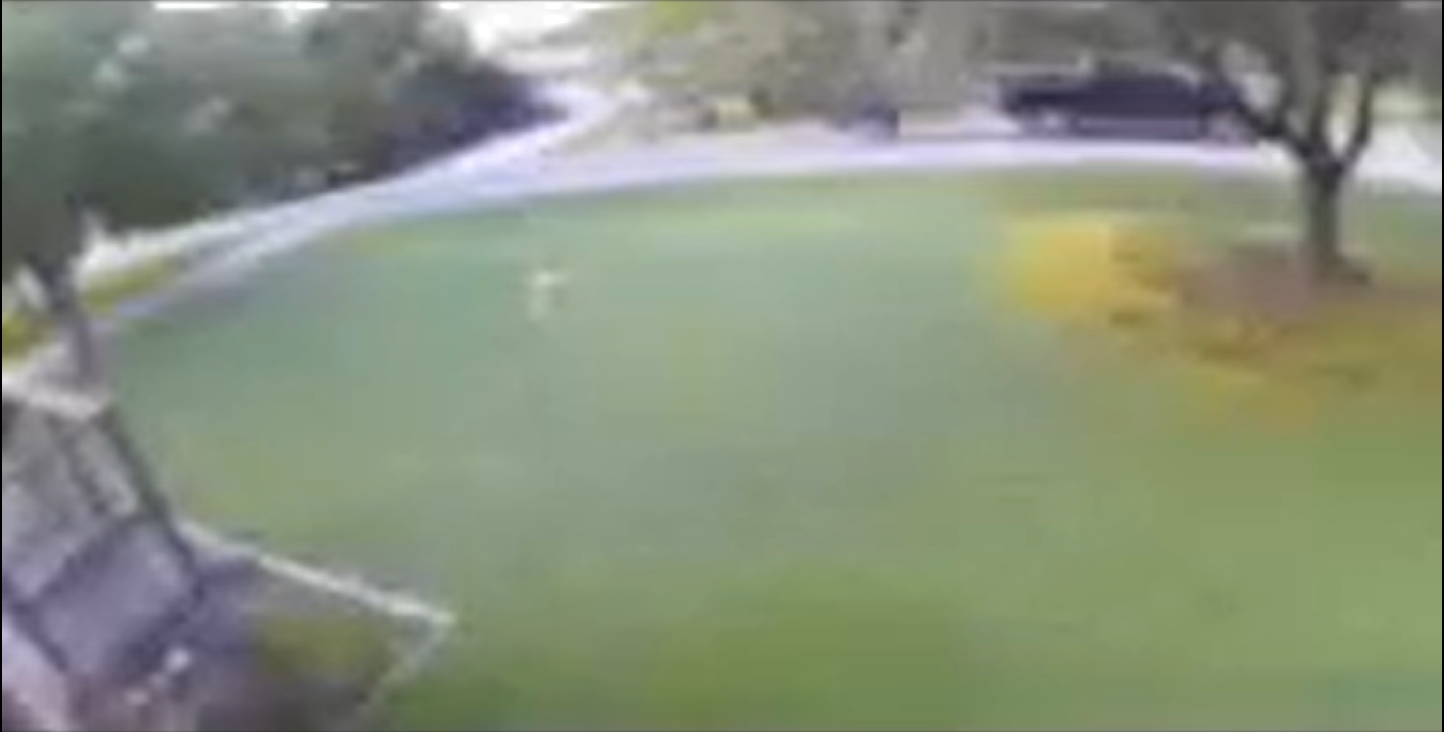 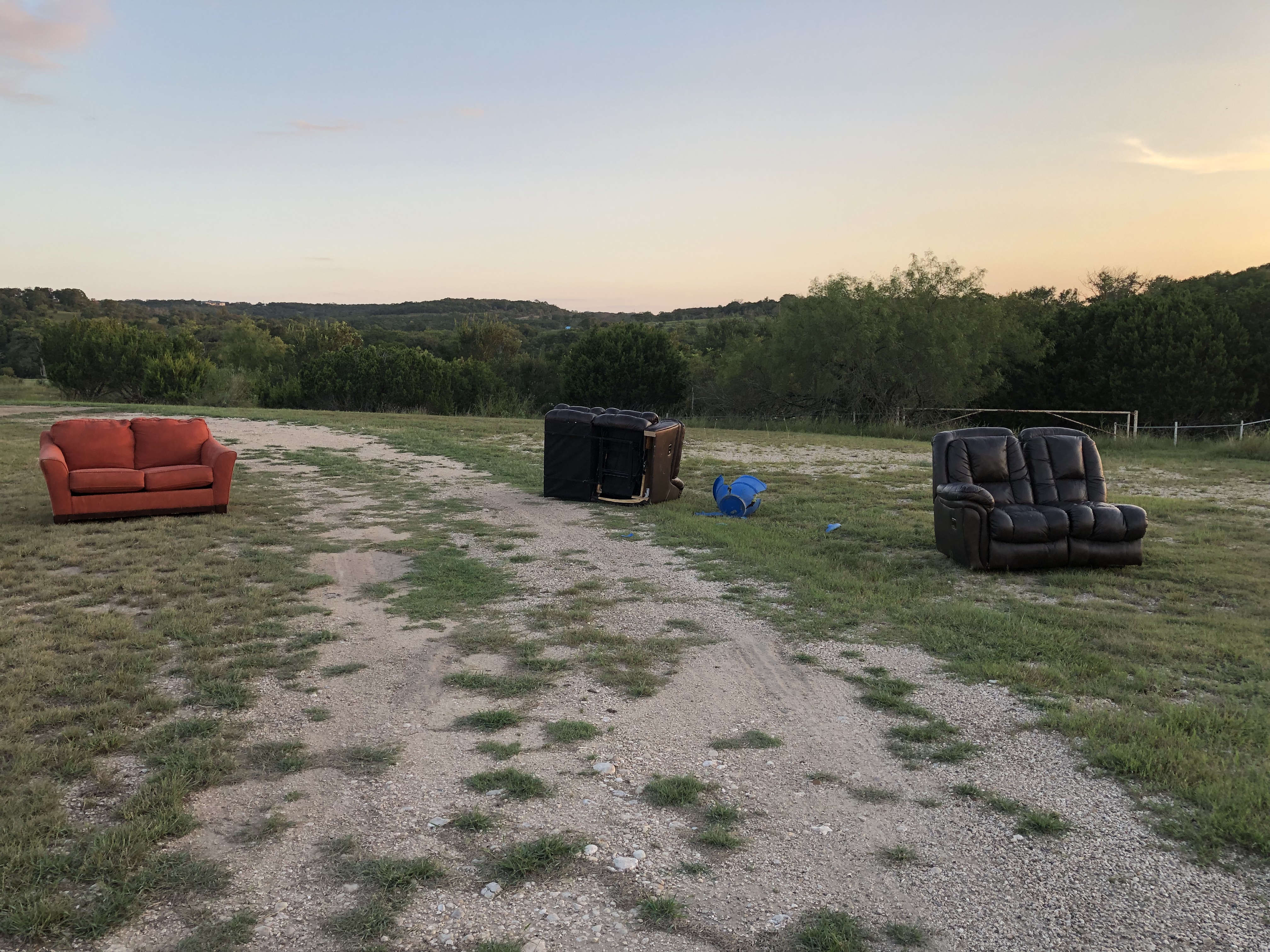 Burglary outside of Ingram
September 03, 2021

STATUS: OPEN
9/27/2021 - Update:  Deputies identified suspects in this case and Crime Stoppers is no longer requesting assistance with this case.  Thank you Kerr County! #oneteam
On August 30, 2021 Deputies with the Kerr County Sheriff's Office responded to the report of a burglary in the 100 block of Paradise Retreat Road, Ingram, Texas.  The burglary occurred sometime between August 23, 2021 and August 30, 2021.  The burglars damaged the house and stole in excess of $2,000 in property that included guns, jewelry, currency and personal identifying documents.  Report tips anonymously at www.kerrtips.com, or by using our P3 Tips app on your smart device. 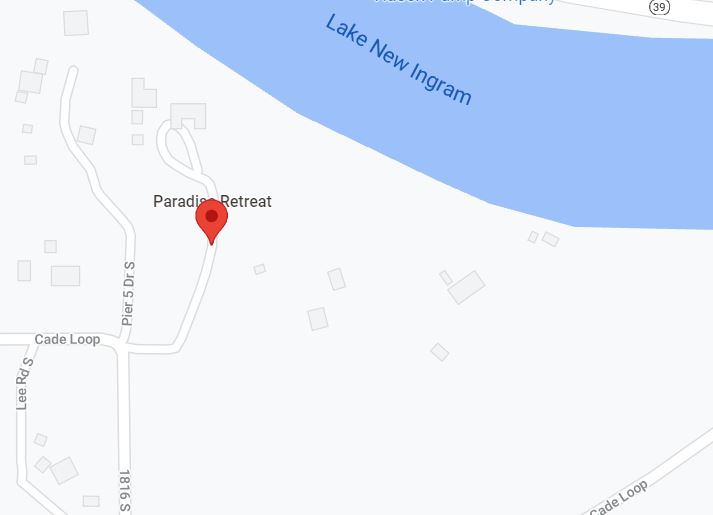 STATUS: OPEN
Sometime between July 30, 2021 and August 13, 2021 unidentified suspects entered a barn in 100 Block of Antler Pass, Ingram, Kerr County, Texas.  The suspects stole in excess of $2,500.00 in power tools and miscellaneous other items.  The Kerr County Sheriff's Office is investigating this case as well as another burglary that has occurred in the Ingram and Hunt area.   Kerr Crime Stoppers Inc. could pay a cash reward for information that leads to the arrest of the suspect(s) and/or for information that leads to the recovery of stolen property.  The tip must be the first to provide accurate information to be eligible for a reward. 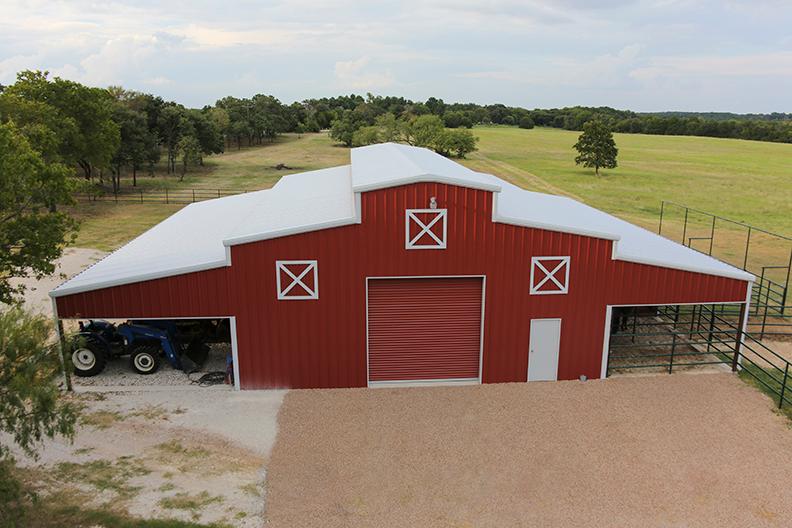 On August 17, 2021 Kerr County Sheriff's Office, Deputies responded to a property in the 1300 Block of Highway 39, Hunt, Kerr County, Texas for the report of a felony theft.  The complainant reported several thousand dollars in tools was stolen from that address.  The tools include nail guns, a hammer drill, Oxygen and Acetylene tanks with torches and hoses, and routers.  Kerr Crime Stoppers Inc. could pay a cash reward for information that leads to the arrest of the suspect(s) and/or for information that leads to the recovery of stolen property.  The tip must be the first to provide accurate information to be eligible for a reward. 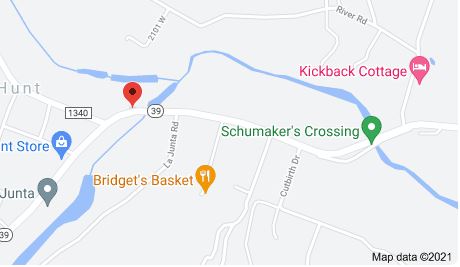 No its not Friday but this is by far the most important case we have ever posted here.
From our friends at the Kerrville Police Department:
Today, August 9, 2021 marks the one year anniversary of the passing of Gideon Barideaux. The Kerrville Police Department, along with other law enforcement agencies and the 216th District Attorney’s Office, continue to actively investigate this child homicide.
On Thursday, August 6th, 2020 at about 9:00 p.m., Kerrville Police Department officers responded to the 3300 block of Legion Drive regarding a child with injuries. The child, Gideon Barideaux, 2 years of age, was reportedly injured in an accidental fall. He was transported by air ambulance to University Hospital in San Antonio. Despite the best efforts of hospital staff, Gideon died on August 9, 2020.
Investigators, as well as medical staff, recognized Gideon’s injuries were not consistent with an accident. The Kerrville Police Department immediately began an investigation in order to determine how Gideon became injured, and to identify those responsible. Jennifer Barideaux and her boyfriend, Tadeo Garces Jr were interviewed by KPD Criminal Investigations Unit investigators, and both maintained that the child’s injuries were the result of an accidental fall.
On August 14, 2020, the Bexar County Medical Examiner’s Office determined Gideon’s manner of death was a homicide. Forensic medical experts reported Gideon’s injuries could not have been caused in the manner Barideaux and Garces claimed.
Kerrville Police Department investigators, working closely with the 216th District Attorney’s Office, multiple state and federal agencies, and the Kerr County Sheriff’s Office, continued a painstakingly detailed investigation into Gideon’s death. As a result of the investigation, KPD investigators obtained arrest warrants for Barideaux and Garces for Tampering with Physical Evidence.
On October 20, 2020, both Barideaux and Garces were arrested and charged with Tampering with Physical Evidence, a Third Degree Felony. Barideaux invoked her Fifth Amendment rights and continues to refuse to cooperate in this investigation into her child’s homicide. A formal indictment in the 216th District Court has not yet taken place.
On July 26, 2021 in the 216th District Court in Kerrville, Kerr County, Texas, the defense for Garces requested a plea deal for the offense of Tampering with Evidence. After consultation between the 216th District Attorney’s Office, Kerrville Police Department’s Criminal Investigations Unit and the family of Gideon Barideaux, a plea offer was made and accepted by Garces. The Honorable Judge Pattillo has set a sentencing date of September 30, 2021.
This case remains under investigation. The Kerrville Police Department continues to conduct interviews and pursue leads related to this offense, and anyone with information in this case is urged to contact the Kerrville Police Department or Kerr County Crime Stoppers at 830-896-8477, please reference Case # 2001577 when leaving a tip. Crime Stoppers will pay up to $5,000 for information leading to the arrest and charges filed on the person(s) responsible for the death of Gideon Barideaux.
17 Comments
18 Shares
Like
Comment
Share

STATUS: OPEN
On Friday, June 18, 2021 Kerr County Sheriff's Office, Deputies were dispatched to a property in the 100 Block of Thrill Hill, in Mountain Home, Texas for the report of a burglary and felony theft. During the investigation Deputies discovered a travel trailer was stolen, a cabin was burglarized and a vehicle was burglarized.  The 2018, 29 foot, white/black, Jayco, Jay Flight travel trailer had Texas license plate B229041 on it when it was stolen.  The travel trailer was customized and should be easy to recognize.
Kerr County Sheriff's Office, Investigators need your help to identify the suspects in this case. If you have any information about these crimes or any person(s) involved, you are urged to call Crime Stoppers or submit a Web Tip.  You do not have to give your name.  CRIME STOPPERS will pay a cash reward of up to $5,000 and you can remain anonymous. 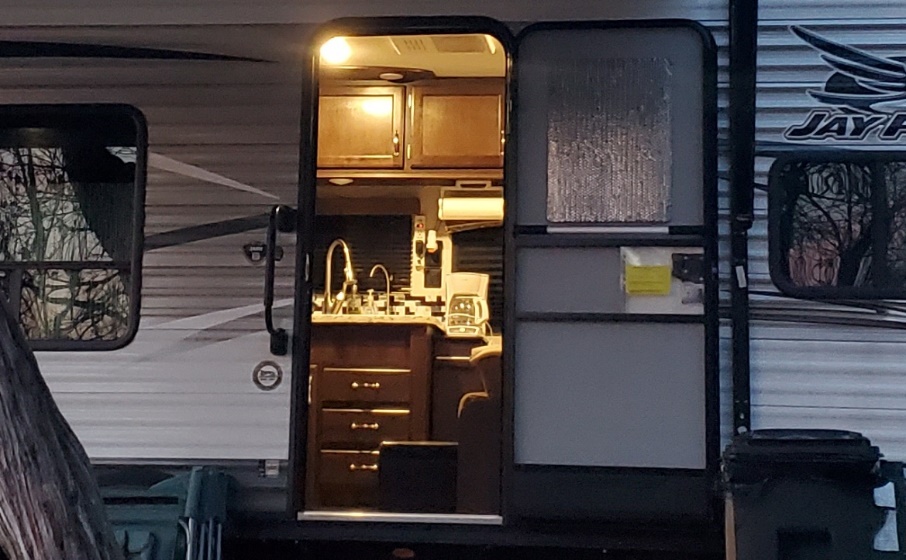 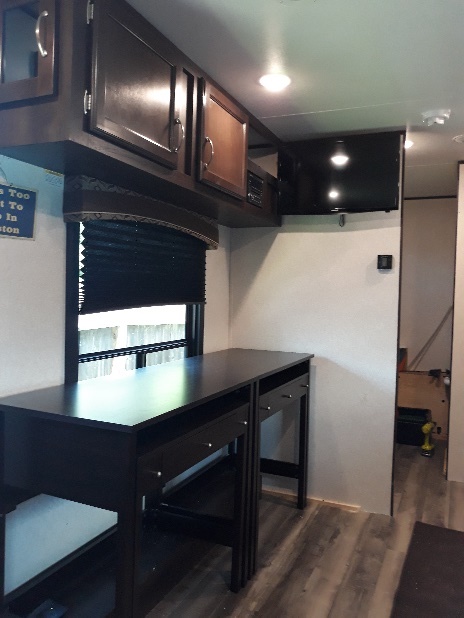 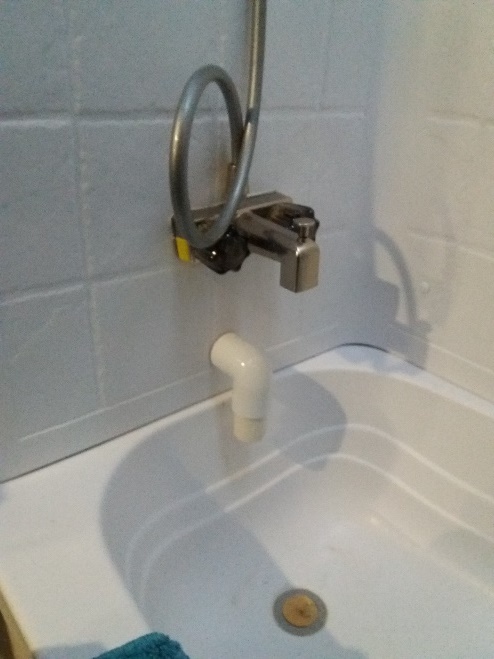 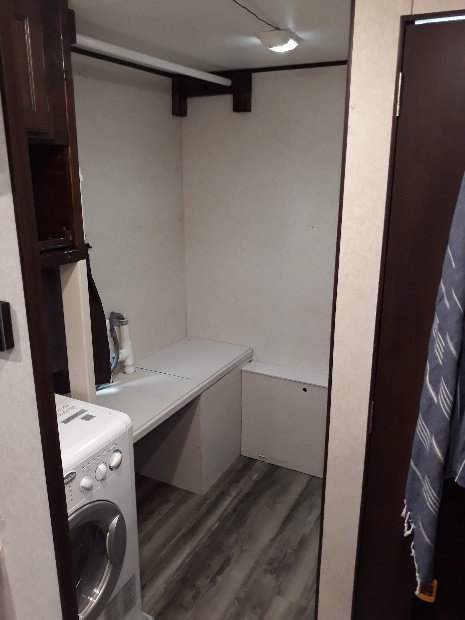 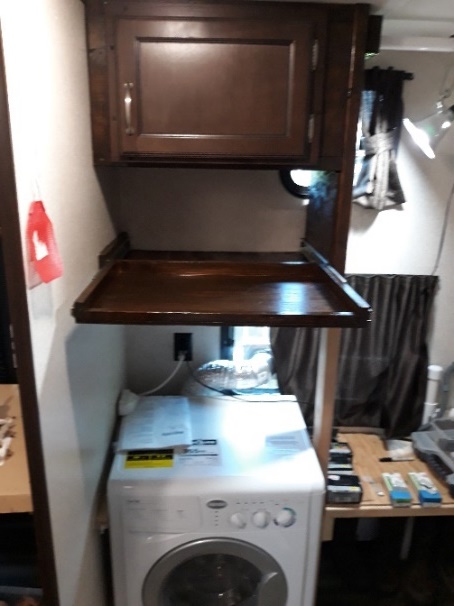 Several crimes this week, but nothing worthy of "Crime of the Week."  See you next week.

STATUS: SOLVED
Update:  7/30/2021 - this case has been solved!  Thank you Kerrville and Kerr County!
Copied from our friends at the Kerrville Police Department's Facebook page:
***Stolen vehicle***
Please keep an eye out for this 1994 Jeep Wrangler that was stolen last from the 1100 block of Nancy Beth Drive sometime last night.  The Jeep is black in color and has a soft top with KC off Road lights in the front and steel tube front and rear bumpers.  The Jeep is a stick shift and has a Texas license plate of DV37564.
Also, stolen last night was a 2005 Chevrolet, Silverado with California license plate 7T15122.  This truck was stolen from the 2600 Block of Singing Wind.
Report tips anonymously to 830-896-8477 or use our P3 Tips application.  Information provided to Kerr County Crime Stoppers about either of these thefts could lead to a cash reward. 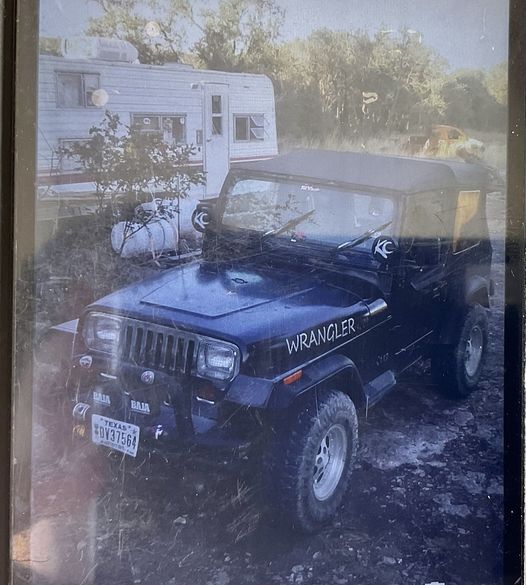 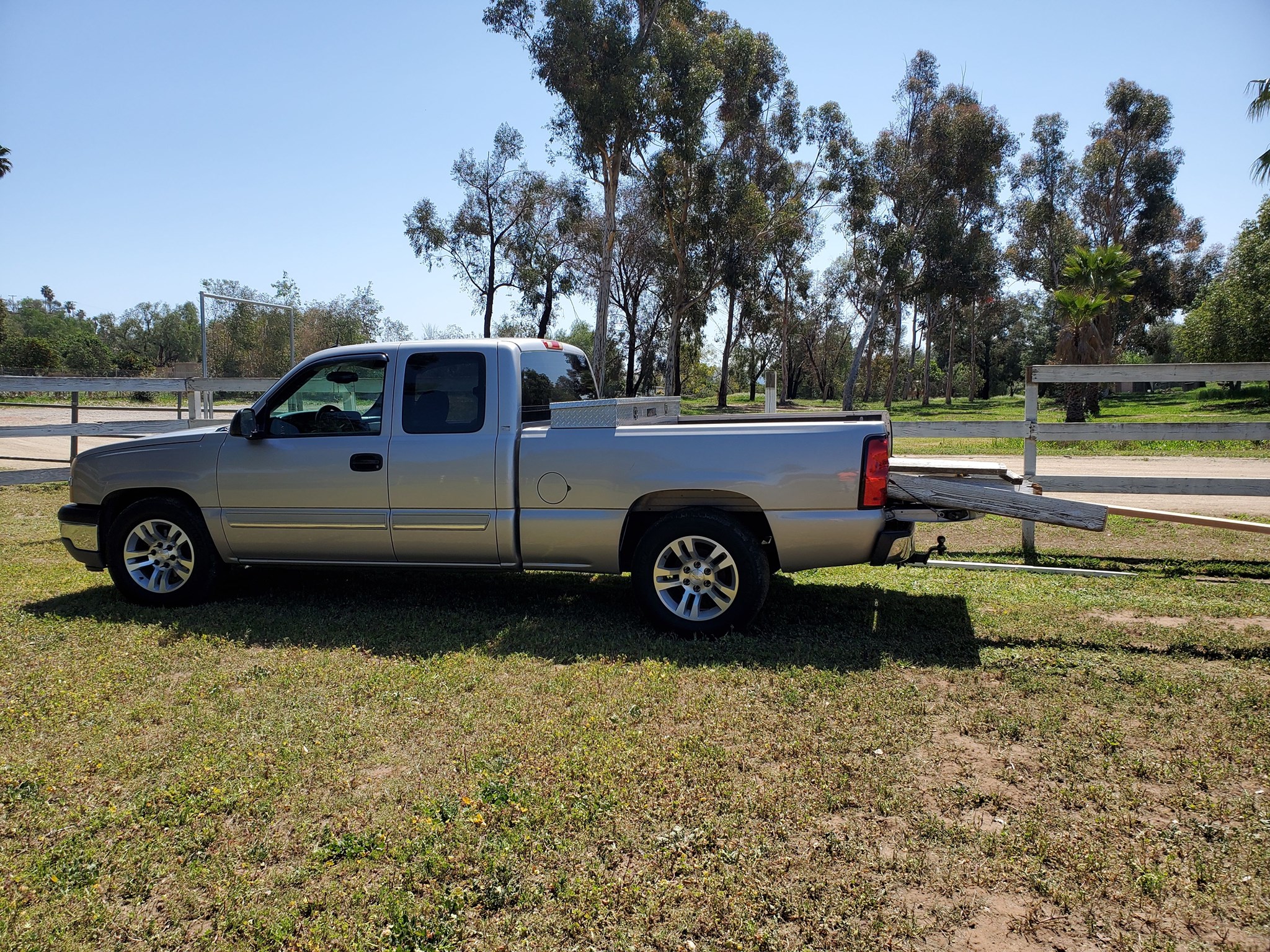 Burglary of a Vehicle and Credit/Debit Card Abuse
July 16, 2021

During the late evening hours of July 13, 2021 or the early morning hours of July 14, 2021 unidentified suspect(s) entered a vehicle a took property including a credit/debit card.   The pictures attached are persons of interest in this case.  Crime Stoppers may pay a cash reward for information that leads to the arrest and or indictment of the suspects in any case. 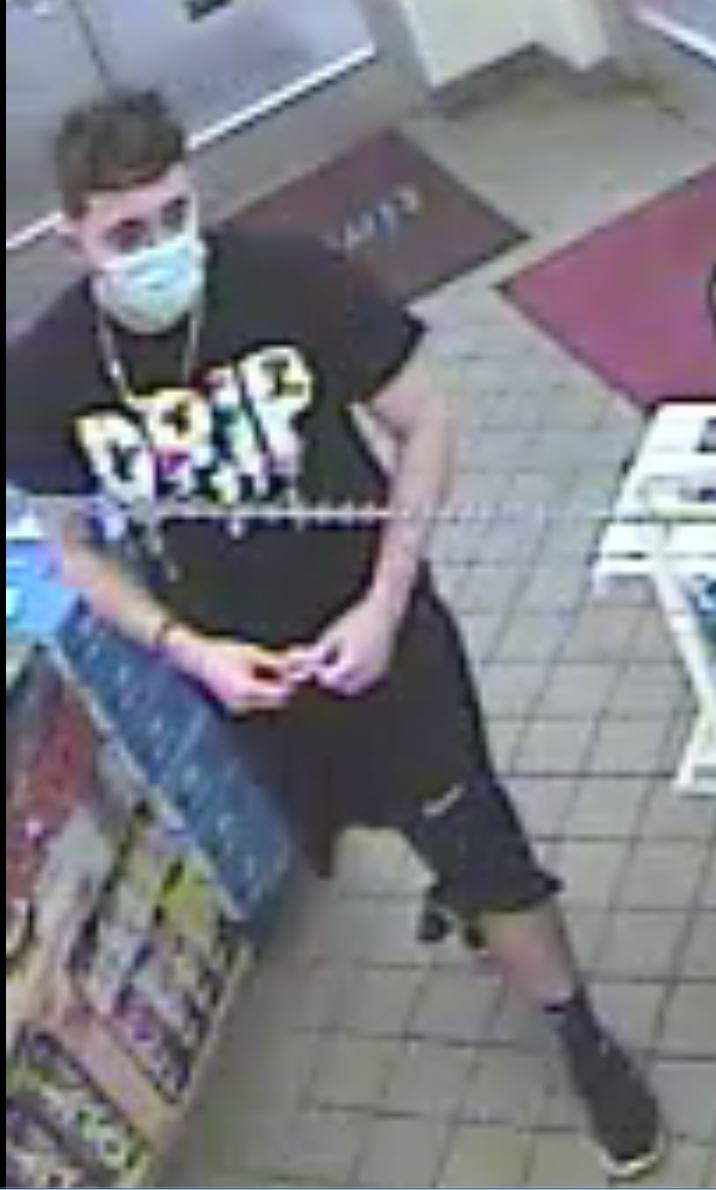 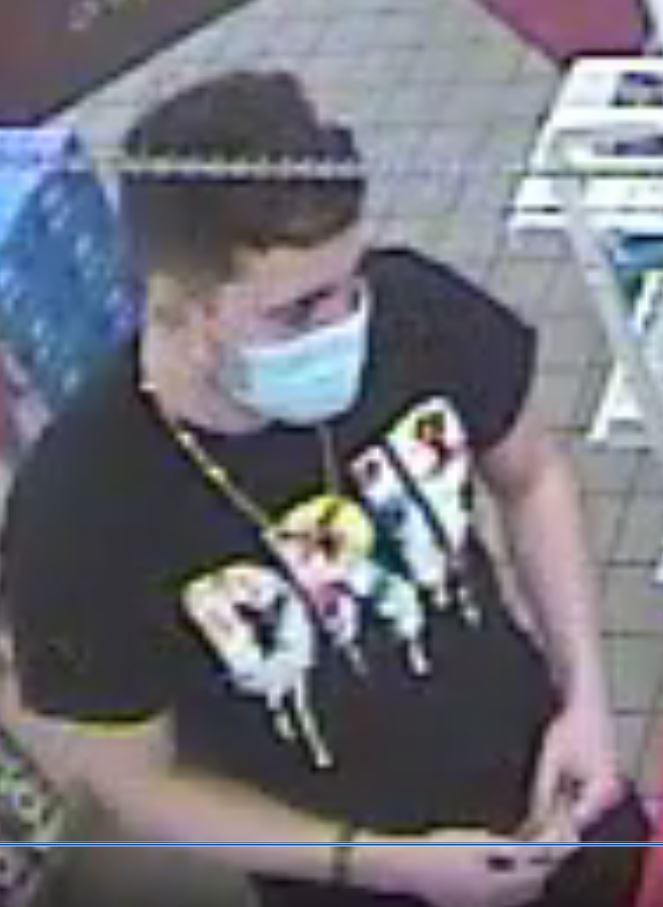 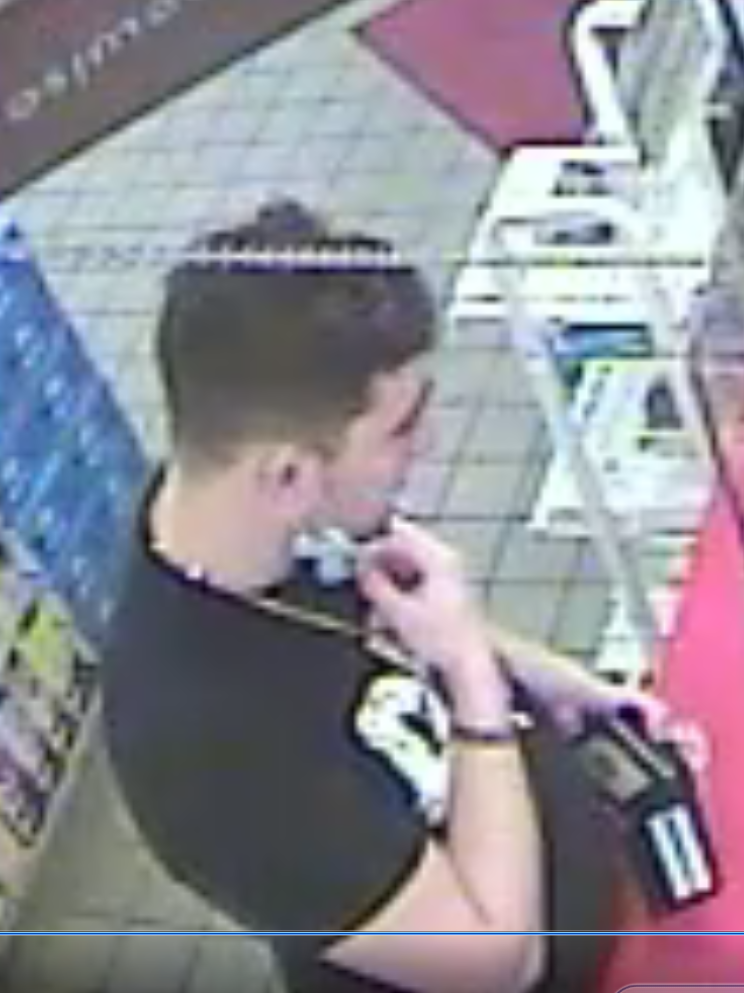 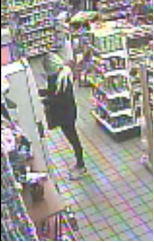 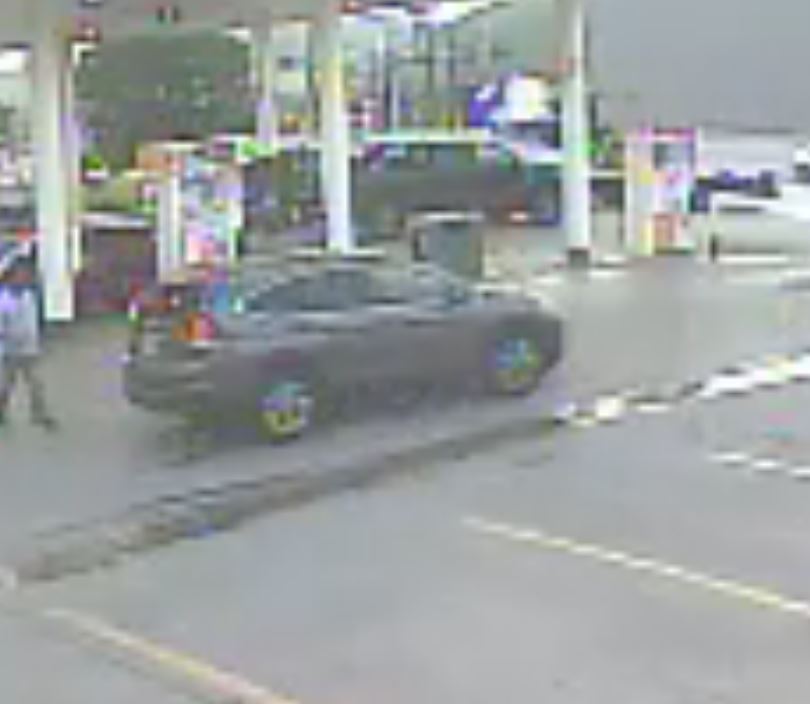